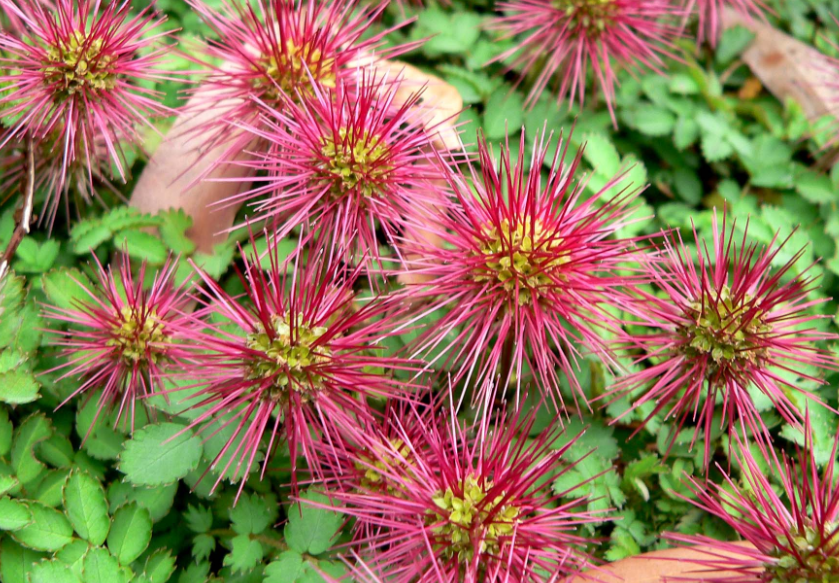 The New Zealand ground cover plant Acena appeared in Russian gardens about 10 years ago. It is a small semi-shrub with woody branching stems lying on the ground. The genus contains about 100 species. In decorative gardening, 6 species are used, and in the literature often all of them are recommended for 5-7 climatic zones.

So far, only 2 species are grown in our gardens: small-leaved Acena (Acaena microfilla) and Acena Buchanan (A. buchananii). They feel great and develop in a moderately cold climate.

Acenes are mountain plants that form loose transparent "mats". From the nodes of the lignified stem, shoots of the current year grow with alternately arranged evergreen non-pinnate leaves. In the conditions of Central Russia, they are partially preserved by spring. Young branches of Acena in the first year of life grow vertically and rise to a height of up to 10 cm (small-leaved Acena) or 20 cm (Acena Of Buchanan).

In June, acenes bloom. Leafless peduncles with a spherical inflorescence at the end rise up from the axils of the shoot. The height of the peduncles is 10-20 cm, the diameter of the inflorescence is 1-1. 5 cm. the inflorescence Ball consists of small white flowers tightly pressed together. Flowering lasts for almost a month, then over the lace of foliage, white balls turn into prickly glomeruli with thorns. The root system of Acena is shallow, superficial, often the stems lying on the soil are rooted in nodes.

In small-leaved Acena, the length of annually growing lateral shoots is 15-20 cm. Acena Buchanan is larger, its shoots can give an annual increase of up to 50-60 cm.

Currently, varieties of these Acena with beautifully colored foliage have been obtained by breeding: small-leaved Acena has a variety 'Coppertape' ('Cupferteppih') with copper-red foliage, from acena The Buchanan - sort of 'Blue haze' ('Blue haze') with blue leaves.

Atzeni in the garden look very attractive, especially they look good in planting small-leaved (crocuses, the squill, chionodoxa). In the spring, when the young branches of Acena have not yet grown, small-leaved flowering plants attract attention. After they bloom, the Acena will cover the soil above them with a lace Mat. Acenes are also good for decorating trunk circles.

To create a uniform soil cover from the acena in the designated area of the flower garden, it is necessary to adjust the location of the stems. You can plant in the empty spaces with additional pieces of the stem.

Moderate throughout the season. The soil at the Acena planting site should be constantly moist, but not over moistened.

Propagate only by vegetative-stem cuttings. They root easily in partial shade without a micro-Bush.

Acenes grow well in the garden, if you create certain conditions for them. First of all, you need to consider that they do not like hot sun. It is best to plant acenes in light partial shade. This can be the Eastern and Western slopes of the slide or a flower garden under deciduous trees. Acenes do not tolerate the" neighborhood " of weeds, they need a lot of air.

Acenes like moderately warm weather. In the heat, the leaves are rolled up. Frosts up to -20 °C acenes can withstand, but at temperatures below -20 °C they freeze out. Shelter for the winter acenes do not like they stick out even under lutrasilom.

In wet, cold weather, the stems and leaves are damaged by rot. Rotting can also be caused by the presence of weeds in the planting area. If acenes grow under deciduous trees, you need to remove fallen leaves in the fall.

Acenes easily take root in a non-hot place with moist soil. They are planted in loose, moderately fertile, weed-free soil; a piece of shoot with roots is placed on the surface of the soil and pinned in 2-3 places.

Regular transplanting is not required.