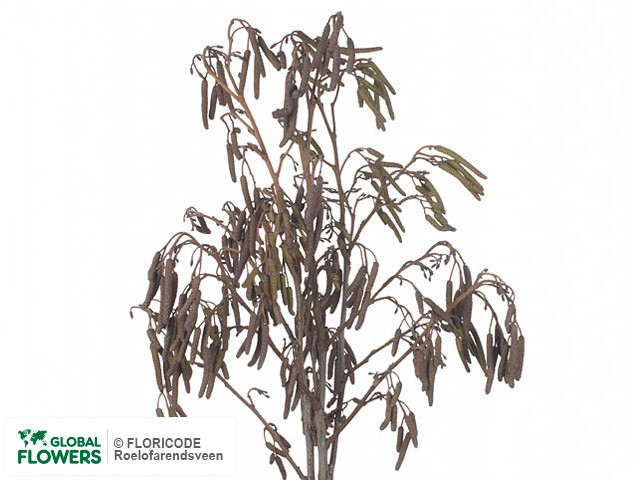 The genus Alder (Alnus) includes approximately 35 species of hardy deciduous trees and shrubs. The crown is usually thick, ovate, cylindrical, narrow-pyramidal, and other shapes. The bark is smooth, light and dark brown. Leaves alternate simple, toothed or lobed-toothed. Blooms in early spring before or simultaneously with the opening of the leaves. Male inflorescences - long catkins. Female inflorescences - short spikelets, single or in racemes of 2-6; when ripe, the bract scales turn woody and take on the appearance of small dark brown "cones".

Black alder, or glutinous alder (Alnus glutinosa), is a tree with a height of 10-25 m, with an erect trunk, often divided from the base, with dark brown bark. The leaves are rounded, with a notched tip and a wedge-shaped base. It is characterized by intensive growth in the first years of life. Decorative forms - weeping, pyramidal, golden and others-are widely used in landscaping.

Gray or white alder (A. incana) is a branching shrub (in unfavorable conditions) or tree that forms numerous root shoots and shoots from the stump, 3 to 16 m high, with an erect trunk covered with smooth light gray bark. The leaves are ovate-oblong, with a serrated edge. The flowers bloom in early spring, before the leaves.

Green alder (A. viridis ) is a shrubby species 2-4 m high, with long erect branches. The leaves are ovate-elliptical. Inflorescences appear simultaneously with the leaves - in March-April.

Alder is grown in parks and gardens, many types and forms of it are decorative, gas-resistant, have a late period of leaf fall and are therefore common in landscaping. Plants are planted on a permanent planting site in autumn or spring (in cold winters). Alder is moderately demanding to moisture and soil, responds well to the application of organic fertilizers at the rate of 1-3 kg per plant. Pruning is usually unnecessary, but dry and damaged branches should be removed.

The plant needs fresh, moist soil. When growing in relatively dry areas and during periods of drought, alder should be watered often and abundantly, first of all - young plantings.

They are mainly propagated by seeds; in spring, they are sown directly into the ground in the fresh air, covering the seeds with a thin layer of humus, and maintaining high humidity. After germination, the seedlings are transplanted several times, leaving the necessary distance between them. They can be planted permanently in 2 years.

Shrubby species can also be propagated by layering, root scions. The first ones are separated from the mother plant when they are well rooted. The second can be planted immediately on a permanent landing site.

Alder trees need a place in the open sun or in light shade.

The plant successfully tolerates both high and low air temperatures. Most species have good winter hardiness.

The most dangerous pests of black alder include larvae of May and June crustaceans, as well as blue alder leaf beetle, less often alder is damaged by medvedka, wireworm larvae, and scoops. Young alder trees are loved by mice and hares. Among fungal diseases, alder is affected by alder tinder, occasionally by beech cancer.

Alder trees are easily found in specialized nurseries and gardening centers. Choose small plants, they are easier to plant in the ground. Check the condition of the seedlings.

It takes root best of all

Black alder, or sticky alder, is a very common plant, it is suitable for a variety of soils: loose, clay, and poorly fertile. It grows even in swampy or water-covered areas. Alder is a soil-improving species due to nodules of nitrogen-fixing bacteria on the roots. Alder is suitable for anchoring riverbanks, ravines, and slopes. It can perfectly grow together with willows and poplars. Due to its very extensive fibrous root system and rapid growth, alder is widely used in garden and park construction.

Other plants from the Betulaceae family