A plant with many rosettes 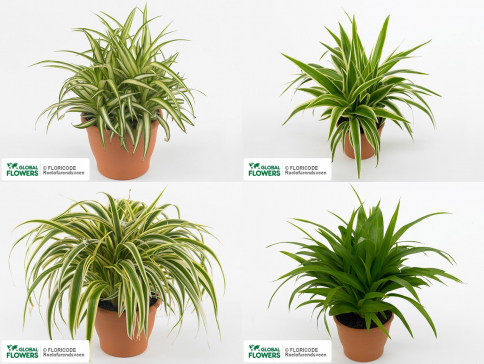 The genus Chlorophytum includes about 220 species of perennial evergreen rhizomatous plants, often with large aerial roots, among which two species are cultivated - chlorophytum crested (Chlorophytum comosum) and chlorophytum winged (Ch. elatum). Mostly variegated varieties are grown. The leaves are linear grooved, brittle, often with white longitudinal stripes; in the botanical species, the leaves are evenly colored green. Peduncles are thin, very long, and shoot-bearing (at the ends they form bundles-rosettes of small leaves that are used for reproduction; they easily root on their own). The flowers are white, small, with six narrow elongated petals, collected in a brush, bloom among bundles of leaves.

In culture, garden forms of Ch. elatum are most often grown. Among them, 'Striped' with a central white stripe on the leaves may be the most common; 'Painted' has a yellow stripe, and the leaves of chlorophytum 'Mottled' are white-edged.

Chlorophytum is grown at home, in a pot, using a mixture of leaf, humus earth and sand, which contributes to better drainage. A complex fertilizer is applied to the soil at the rate of 20 g per bucket of soil. Then, every week, a water-soluble fertilizer in the amount of 0.5-1 g per bucket is added to the water for irrigation. It is used as an ampel, in groups and compositions.

It is recommended to periodically wipe the leaves with a damp cloth, remove dry or damaged ones.

In spring and summer, watering should be quite plentiful and frequent, so that the land always remains moist, but water stagnation should not be allowed. In winter, watering is noticeably reduced.

Transplanted annually in the spring (only if required) in larger pots, using the same soil as recommended for cultivation.

The simplest method is to separate medium-sized young rosettes of peduncles and root them in the ground or water, then transplant them completely. This operation can be performed in three ways. The first method is to put a pot filled with high-quality and well-drained peat-sanded soil next to the pot with the mother plant, and bury the base of the outlet in it. The socket will be separated only after the roots appear.

Just as successfully, you can propagate in another way: at any time of the year, take a well-formed rosette (which already has small roots) and plant it to take root in a peat-purulent or other pot. The third method, as simple as the first two, is to submerge the lower part of the rosette separated from the peduncle in water and keep it there until the roots form.

Plants should be placed so that they get diffused light, and not direct sunlight. If there is not enough light, the color will be less bright, and the leaves will lose their elasticity.

The air temperature when growing chlorophytums should not fall below 8 °C, although for short periods in almost completely dried soil, plants can withstand a lower temperature. The optimal winter temperature is 12-14 °C.

If the plant is watered too much, it can rot. Avoid stagnating water and stop watering immediately. If there is a lack of humidity, a spider mite can appear, which causes yellowing of the leaves and the appearance of spots on them. In this case, the air humidity is increased and treated with acaricides.

Choose not too elongated and without visible damage to the leaves of the plant.

Requirements and characteristics of the Chlorophytum plant that you need to remember.

Other plants from the Asparagaceae family