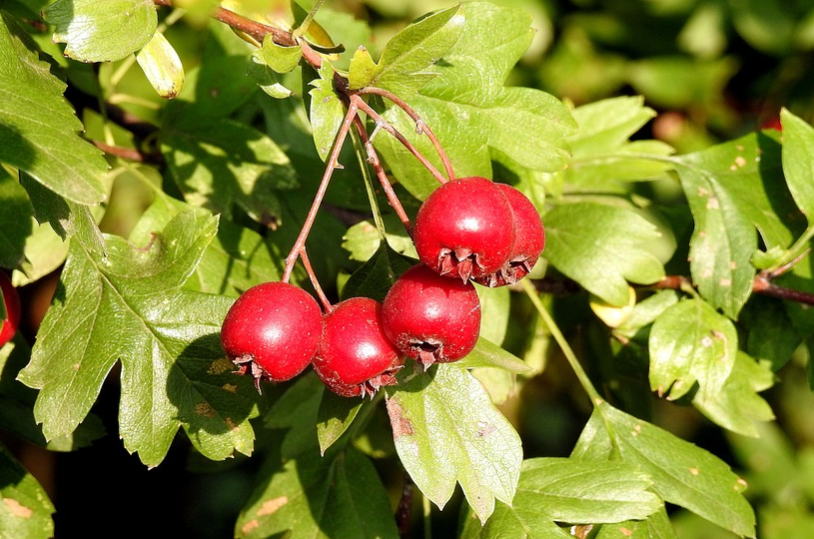 The genus Hawthorn (Crataegus) includes 200 species of deciduous, rarely semi-evergreen, usually short trees and shrubs. Shoots are usually spiny; leaves from whole to pinnate and pinnately dissected. The flowers are white, less often pink, with an unpleasant odor, collected in corymbose inflorescences, bloom in May-June. The fruit is drupe, the so-called stone apple, contains 1-5 seeds. Hawthorn is resistant to adverse environmental conditions, strong winds. Wild plants are thorny, and many cultivars have no thorns.

Among them, the blood-red hawthorn (Crataegus sanguinea) is known; smooth hawthorn (C. laevigata) - low (3-4 m) tree; hawthorn (C. monogyna) and other plants. All these species have different cultural forms and varieties.

The genus Hawthorn includes numerous decorative species and varieties. All these are thorny shrubs or trees with decorative flowering with white flowers, collected in shields, then red fruits are formed in their place in the fall. They are very often used in almost impenetrable dense thorny hedges.

The thorny hawthorn (C. oxyacantha) has many varieties with flowers and fruits of various colors and shapes. For example, the 'Pauls Scarlet' variety has crimson-red flowers.

The hawthorn (C. monogyna) is a very branched shrub with flowers of a pronounced aroma. It has many forms and varieties, among them the famous 'Two-flowered' (or 'Early') with repeated autumn flowering.

Hawthorn prunifolia (S. x prunifolia) - hybrid, tree with a dense crown. In autumn, the leaves take on a bright color.

Hawthorn is grown in the open field as a fruit and ornamental crop. Due to its dense crown, beautiful autumn color of leaves, resistance to air pollution, hawthorn is widely used in landscaping. Suitable soil is not waterlogged and not too dry, loamy or sandy loam. Plants are planted in a permanent place in the fall or spring, when planting organic fertilizers are applied: manure at the rate of 5-6 kg/m2 and full mineral (30-40 g/m2). In the spring, fertilizing is carried out with a complex mineral fertilizer - 80-100 g/m2. The fruits ripen in August-October, they are eaten fresh or processed. Dried fruits, flowers, leaves are used in medicine. Every year at the end of winter, the plants are cut to the desired shape, the branches are shortened by 2/3 so that they do not lengthen too much.

If the soil is fresh, watering is sufficient during periods of prolonged drought and immediately after planting in the ground.

The hawthorn needs a sunny spot.

It is resistant to both high and low air temperatures.

Caterpillars of the butterfly Hyponomeuta padellus provoke leaf fall. Pests are eliminated with appropriate insecticides. Aphids are treated with appropriate preparations. A spider mite appears when the air humidity is low, it is eliminated with the help of acaricides. The honey fungus (Armillaria mellea) causes severe root rot, which leads the plant to death. Also dangerous is a fire blight caused by Erwinia amilovara, from which the plant shrinks in size as if it were on fire. In both cases, the affected plants are removed.