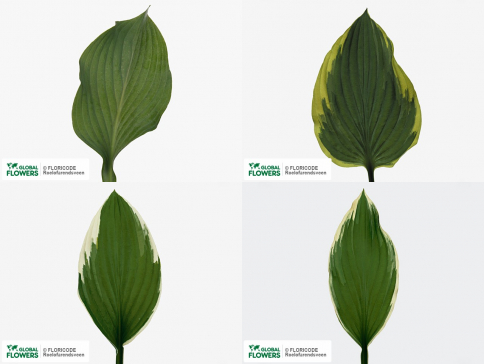 The genus Hosta contains about 40 species of herbaceous perennials. They are cultivated mainly as an ornamental plant. Hosta leaves are numerous in a dense basal rosette, long-stemmed, of various shapes, sizes and colors (bluish-bluish, green, mottled, edged). The rhizome is shortened. Peduncles up to 1 m high bear funnel-shaped bell-shaped flowers collected in loose inflorescences.

Hosta crispula is a 60 cm tall plant with broad ovate dark green leaves with a wide white border and a length of about 20 cm. The flowers are lilac, blooming in late spring and early summer.

Hosta is tall (H. elata), 60 to 80-90 cm high, has dark green large glossy elliptical leaves and light lilac flowers that appear in June-July. The variety 'White-painted' has yellowish-white leaves with an uneven green edge, and 'Golden-edged' has green leaves with a golden-yellow edge.

Hosta Sieboldiana (H. sieboldiana) is a species with a height of 60 cm, with glaucous, over 30 cm long, elliptical leaves with a heart-shaped base, with pronounced venation. The flowers are pale purple or light purple, sometimes with purple spots, blooms in July-August.

Hosta undulata (H. undulata) is a species of garden origin with a height of 60-75 cm with large oblong - oval, up to 20 cm long and 12 cm wide leaves with a strongly wavy edge, with white spots. Light purple flowers bloom in summer. This species has two very common garden forms: 'Middle-motley' with light green leaves with a yellow pattern and lilac flowers and Hosta wavy erromena (H. U. erromena) with smooth leaves and darker flowers than the botanical species.

Hosta swollen (H. ventricosa) has green, heart-shaped leaves with a sharply pointed tip and purple-blue flowers that bloom in late spring. There are also many cultivars that are not easy to assign to a specific species, for example, Kingfisher with large green-blue heart-shaped leaves and gray-purple flowers collected in dense brushes.

Hosta is grown in the open ground in borders and flower beds, along paths, as well as in groups or singly on lawns and lawns, near reservoirs. Many types, varieties, and garden shapes can be used to create interesting color contrast spots with other herbaceous species. Thanks to their lush growth, they contain and stifle weeds; they are also used as groundcover plants. They prefer moist soils rich in humus. Unpretentious in culture. Plants are finally planted in the ground in October (in areas with cold winters) or in March at a distance, depending on from their development, 30-60 cm apart.

As a rule, propagate by dividing the bush in the spring. Sowing of seeds is carried out at the end of winter. As soon as the seedlings grow up, they are transplanted into pots one at a time, and then planted completely. Seed propagation is used only for species with green leaves (since the rest do not retain the properties of the parent plant).

Plants of the Hosta genus are resistant to both high and low temperatures, and are characterized by winter hardiness.

Often Hosta is affected by the gray rot of vegetable crops (Botrytis cinerea), which provokes leaf rot, and Sclerotinia delphinii, from which the root neck begins to rot, white cotton mold develops. In the first case, folpet-based fungicides are used, in the second-dichloran. The foliage can be damaged by snails, and appropriate baits with metaldehyde are used against them.

Variegated potted species and varieties are bought in flower nurseries and horticultural centers. Check that the foliage is lush and healthy.

Other types and varieties

There are various species of the genus Hosta, distributed as decorative-leaved crops, the leaves of which are evenly colored green or can be variegated.

Hosta fluctuans (Hosta fluctuans) is a rhizomatous root-spreading species with a height of 50-70 cm. The leaves are fusiform, wavy, opaque, dark olive-green on the upper side and bluish on the lower side. The Variegated variety has large leaves with a wide golden-cream border.

Hosta lanceolata (H. lancifolia) is a species 40-50 cm high. It has lanceolate glossy leaves, petioles are long, with reddish spots at the bottom. The flowers are funnel-shaped purple with dark stripes inside, blooming throughout the summer.

Hosta plantain (H. plantaginea) - a species with a height of 50-60 cm. The leaves are large, heart-shaped at the base, glossy, yellow-green. White tubular fragrant flowers on long peduncles bloom from July to September.

Hosta tokudama (H. tokudama) is very similar to Hosta Siebold (H. sieboldiana), but is more compact and grows more slowly. Rounded leaves with a heart-shaped base are gray-blue. In the 'Golden-smoky' variety, the central part of the leaf plate is usually covered with a yellow-cream coating, and the edges are green-blue.

Several types, varieties and many garden forms of Hosta are grown.

The high hyacinth Hosta (H. elata hyacinthina) has leaves with a slightly wavy edge, slightly leathery on the upper side and colored in a bluish and dark brown-green color, and on the lower side they are green-blue.

The Hosta undulata albomarginata has ovate-elliptical flat leaves with a slightly wavy edge, almost the same size as the botanical species; the central part is olive-green; the border is uneven white-cream.

The Golden Tiara Hosta hybrid (now it is difficult to determine which botanical species it comes from) has egg-shaped green leaves with an uneven golden-yellow edge. The flowers are purple-purple.

Requirements and characteristics of the Hosta plant that you need to remember.

Other plants from the Asparagaceae family