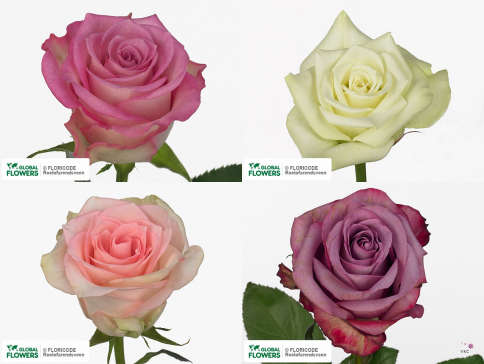 The genus Rosa includes more than 250 wild-growing species and varieties and countless cultivated varieties and hybrids grouped into several classes, or garden groups. The most popular are the so-called hybrid tea roses, derived from old park tea roses. They are distinguished by the beauty of the flower - long narrow buds open into elegant flowers, single or in inflorescences at the ends of slender shoots. There are also groups of climbing roses (with long falling or twining shoots around the support), miniature polyanthus, grandiflora, etc. From a botanical point of view plants of the genus Rosa are multi-stemmed deciduous or evergreen shrubs; lianas and shrubs with slightly woody shoots. The shoots are usually covered with spikes of various shapes and sizes. Leaves alternate, complex non-pinnate, pubescent or smooth, ovate to lanceolate in shape, with a more or less pointed tip, often sawn along the edge. Flowers are bisexual, simple, semi-double or double. They vary in size, color, shape, and flavor. Depending on the type and variety, there are plants with remontant flowering. Roses with simple flowers have a corolla of five divided in roses with semi-double and double flowers, the petals are numerous transformed stamens.

The fruit is a false multi-root formed by transformation of the peduncle (the part of the flower located above the pedicel), usually has an orange-yellow or reddish color. Inside are real fruits-single-seeded nuts that look like seeds. Wild species and hybrids derived from them belong to the group of botanical roses.

In general, roses are a fairly simple crop to grow, they bring great satisfaction even to amateurs. Some low-growing varieties can be cultivated in pots, flower beds, on balconies and terraces, but these are not indoor plants, because they usually do not have enough light in the rooms. At home, they can stand for no more than 2 weeks, but then the plants need to be taken out into the open air. For landscaping terraces, potted roses are used only up to the age of 2 years. Then they are transplanted into the open ground. Roses prefer well-drained fresh fertile clay, slightly alkaline the soil. Avoid excessive loosening or compaction of the soil, as well as adding manure or compost to improve the structure. In moderately cold climates, it is recommended to plant roses in a permanent place in the garden in early spring, but if severe weather persists for a long time, it is necessary to mulch the soil with straw, peat or other organic materials. But in a mild climate, it is better to plant them in November. When planting, the distance between plants should be 70 cm for tall varieties, 40 cm for miniature varieties, and about 1 m for plants grown as trees.

Dry and diseased shoots are usually cut out, and in order for the crown of the plant not to be too thickened, remove part of the buds located on the outside of the shoots.

All roses should be watered abundantly, especially in the spring and summer period.

Most species and varieties prefer a sunny or at least well -lit place. The exception is some climbing roses, which grow successfully in partial shade. If the roses are planted in a place that is exposed to strong winds, the shoots easily break off, especially in plants in the stem form.

All species, as a rule, are resistant to temperature changes and can tolerate both strong drops in winter and very high thermometer readings in summer. The most delicate roses are from the garden groups tea - hybrid and floribunda. However, if you graft on frost-resistant rootstocks, for example, such as the dog rose (R. canina), these roses become more -hardy. However, both root-bearing and grafted specimens should be planted in a relatively protected place. Potted varieties with small flowers freeze out at any subzero temperature.

Powdery fungi (genus Sphaerotheca) appear as a powdery white coating on shoots, leaves and buds. At the same time, the leaves turn yellow and dry; often the buds do not open. In such cases, the plants are treated with fungicides.

The affected branches should be removed. On the branches and petioles of plants infected with rust fungi (Phragmidium disciflorum and P. rosaepimpinellifoliae), bright orange spots appear, and in summer yellowish and brown lesions form on the upper side of the leaves; later the foliage falls off. Yellow-brown spots are also caused by peronosporosis, or powdery mildew (Peronospora sparsa). Gray rot caused by fungi of the genus Botrytis is found in the form of grayish powdery spots. To control the infections listed above, treatment with appropriate fungicides is required. If the soil is poorly drained, possibly rotting of the root system.

If the plants are infected with bacterial root cancer (the causative agent is Agrobacterium tumefaciens), which manifests itself in the form of gall growths at the base of the plant trunk, on the roots, first soft, then stiffening, then they can only be discarded. The so-called mosaic jaundice manifests itself in the form of yellowish spots that are visible on the leaves at the lumen. And in this case, you should get rid of the plants.

Chlorosis is a disease in which the process of photosynthesis in leaves is disrupted, primarily due to a lack of iron and other trace elements, can be triggered by pathogenic microorganisms, excessive humidity. Symptoms include yellowing of the leaves and slow growth. When chlorosis is caused by an unbalanced diet (especially on alkaline soils), iron is added to the soil in the form of sulfate or chelate, or other missing elements.

The most common pest is the rose aphid. It affects the buds and the most delicate shoots and causes both direct- damage, sucking out the juice, and indirect, forming a fall. Aphids are eliminated with special insecticides. Thrips and worms that cause similar damage are less likely to attack. Other pests that are dangerous and often found are the rose leaf wrapper (they live in rolled leaves), the spider mite (it entangles the underside of the leaf with a web, causing it to dry up and die), the cicada and others. Pests are eliminated by treating the plants with appropriate preparations.

Varieties and hybrids of the floribunda group, whose name is determined by their characteristic abundant and continuous flowering, are derived from crossing hybrid-polyanthus and tea-hybrid roses.

In the shape of the bush, floribunda roses are similar to hybrid-polyanthous, in the size of the bush - very different, from dwarf to strong-growing. Buds-elongated shape; flowers can be either simple, or semi-double or double, and usually smaller than those of tea-hybrid roses; collected in apical corymbose inflorescences, blooming in June-July. In remontant varieties, the second flowering occurs in September-October. Not all representatives of the group have the aroma. The most common varieties are 'Arthur Bell', 'Chinatown' and 'Queen Elizabeth'. With further crossbreeding modern tea hybrids with roses of the floribunda group were obtained varieties of the grandiflora group. These roses are characterized by increased winter hardiness and strength of growth.

Varieties of the floribunda group are used in borders, group plantings, stems, in addition, in forcing and cutting; grandiflora roses are ideal for decorating gardens and parks. Roses of the floribunda group do not require the removal of numerous extra buds, but at the end of flowering it is necessary to remove all withered flowers. Usually, these hybrids tolerate unfavorable environmental conditions and pest attacks well. However, different varieties are susceptible to fungal infections, such as scab or rust, and diseases such as peronosporosis. The distance between rose bushes depends on from their size, splendor and is an average of 60 cm.

Roses for pergolas and gazebos

Plants of this group are used to decorate pergolas, arches, trellises, walls and gazebos; it includes varieties and hybrids obtained from crossing the multi-flowered rose (Rosa multiflora), the rose wichuraiana and other climbing forms of different groups of roses.

Climbing roses are grown in areas with a relatively mild climate, where they do not need to be covered for the winter. In May-June, elegant small fragrant light simple flowers collected in corymbose inflorescences bloom on the shoots of previous years.

But the popular climbing roses in Europe, obtained from noisettiana and tea-hybrid roses, differ in less lush growth, their semi-double and double flowers are larger. They bloom in June-July and are often remontant with continuous flowering. Hybrids of evergreen roses (R. sempervirens) are also classified as climbing roses. These are strong plants with long flexible stems and abundant flowering from May to July, semi-double and double flowers are collected in large inflorescences. Plants are quite sensitive to oidium. They are suitable for gardening only in mild climates.

This group includes all wild rose species and some hybrids derived from them. They are characterized by a strong stable aroma and increased tolerance to diseases and pests. Leaves are non-pinnate, consisting of 3-5-7-9-13 oval or oval-lanceolate leaflets. Flowers are bisexual, usually simple; corolla of five petals. After flowering, abundant and very decorative fruiting occurs. The fruits are single-seeded nuts enclosed in a fleshy, sprawling flower that forms a false fruit of red and purple tones.

Rose of Banks (R. banksiae) - a lush climbing species of Chinese origin. It grows well in mild climates. Blooms from April, the flowers are small and fragrant.

The Chinese rose (R. chinensis) and the Indian rose (R. indica) are East Asian species with simple flowers, from which various modern roses have descended, inheriting their inherent remontance.

Rose gallica (R. gallica) has complex leaves consisting of five dark green leaflets. In the period from May to June, simple single flowers bloom with red along the edge, and in the center with white petals. Oval fruits have a coral-red color.

Rose eglanteria, or rust (R. eglanteria, or R. rubiginos), is distinguished by decorative and fragrant apple smell of leaves. Bushes are straight, high (up to 2 m), shoots with numerous spikes. The flowers are crimson-pink, single or 3-4 in an inflorescence.

Rose foetida, or yellow (R. foetida, R. lutea), is a straight-growing shrub up to 1.5 m high. It blooms profusely for 20 days with yellow flowers with an unpleasant smell.

Rose wrinkled (R. rugosa) - a shrub with dense shoots covered with thorns, spines and bristles. The leaves are wrinkled, glossy on the upper side, pubescent on the lower side. In June, single, simple and very fragrant flowers of bright pink color bloom, multiple blooms, until autumn.

Rose femoral-leaved, or spinosissima (R. pimpinellifolia, or R. spinosissima), is a shrub up to 2 m tall with dense thin branches and white or cream flowers.

Roses of this group were originally obtained by crossing a remontant rose with a double form of rose foetida; from crossing the resulting hybrid variety with tea-hybrid varieties, many varieties were united into the tea-hybrid group. Long narrow buds open in unusual flowers in the period from May-June to October. They are ideal for cutting. Tea-hybrid roses are fairly strong bushes with a height of 50 to 120 cm, with an overgrowth. The leaves are large, glossy, sometimes opaque, dark green in various shades. Strong, more or less prickly shoots the varieties grown for cutting are very long. The flowers are large, non-double and double, fragrant and odorless, of various combinations of colors and shades. The first hybrids of this group bred had a very strong aroma; over the years, this property has somewhat weakened. However, today the breeders restored it. Large-flowered, dense varieties can be damaged by heavy or prolonged rain. Varieties and hybrids with white flowers should be grown in the open sun, in fertile and well-drained soil. For roses cultivated for cutting, first of all it is important to timely pruning of buds. The side buds are removed to promote the development of the central flower.

Usually tea-hybrid roses are quite sensitive to pests and diseases. Tea hybrids are successfully used for group plantings in the open ground, in a stamp and bush form, for cutting on an industrial scale and at home, in addition, they can be grown indoors.