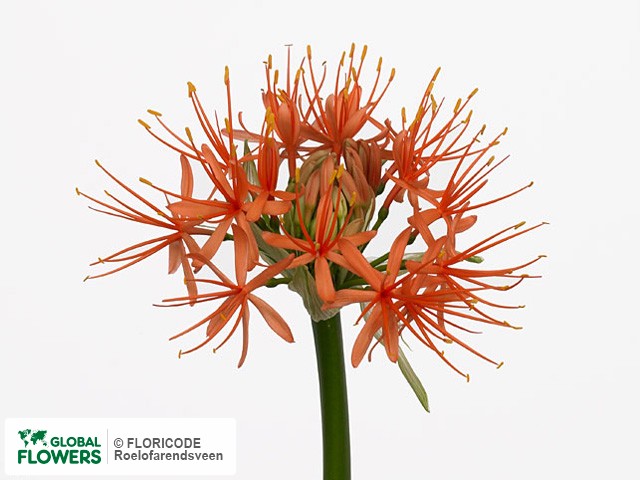 There are 9 species in the genus Scadoxus. It was isolated from the genus Hemanthus (in Greek haima - "blood" and anthos - "flower") - by the color of the flowers of some species, lovers continue to call it hemanthus. For example, a subspecies of Scadoxus multiflorus (Scadoxus multiflorus ssp. katharinae) was previously separated into a separate species and was called Hemanthus katharinae. It is a bulbous perennial, forming up to nine broad-oval folded leaves, whose closed long sheaths, nested one into the other like a telescopic antenna, form the so-called false stem up to 2.5 cm across and up to 70 cm high. From the top of it comes a single leafless peduncle - a flower arrow up to 110 cm in height. It is usually covered with red dots. The peduncle is crowned with an umbrella-shaped inflorescence up to 25 cm in diameter, sometimes consisting of 200 flowers. The flowers are very bright, orange-red, shaded by contrasting yellow stamens. Flowering lasts on average about 10 days. After flowering, gradually reddening oval berry-like fruits are formed, which remain on the plant for up to 2 months. They are attractive and at the same time poisonous, so in the room, plants should stand at this time in places that are not accessible to children. This species of scadoxus is native to the arid regions of Africa, from South Africa to Mozambique and Botswana, where it is found in savannas, along the edges of lowland and mountain forests, and along riverbanks.

Another indoor-bred species is the scarlet scadoxus (S. puniceus), a representative of the flora of South Africa. It is slightly smaller than the previous type (leaves 30-40 cm long, peduncle up to 60 cm). The white-flowered garden form of this species (Alba) is known.

Bulbs of all kinds are poisonous, and in their homeland, locals use them to make poison for arrows.

Scadoxuses look great as beautiful flowering plants as tapeworms or in small groups. They are also used when making bouquets. During the dormant period, the plant loses its leaves, but when grown at a constantly high temperature and regular watering, it can do without a dormant period. Plants that have not passed the dormant period, as a rule, do not bloom or bloom weakly. Scadoxus prefers relatively light, rich soil with good drainage. A soil mixture consisting of sod and leafy earth, humus, peat and sand in the ratio is optimal for them. 2:1:1:1:1. The onion, which can reach 10-12 cm in diameter, you need to plant so that half of it is above the ground.

No special measures are required to maintain decorativeness.

During the dormant period, which falls on the end of winter - spring, scadoxuses are rarely watered, the rest of the time, especially during flowering, which usually happens in late summer or early autumn, it is necessary to water regularly, abundantly.

Plants do not require transplanting for 5-7 years. Disturbed by the transplant, the plant blooms worse. When transplanting, dry and rotten roots are removed and the daughter baby bulbs are carefully separated, trying to preserve their own roots.

Propagate with fresh seeds and baby bulbs. When the fruits are completely red and slightly lose their elasticity, carefully remove the seeds from them so as not to damage the shell and immediately sow them in humus-rich soil. Seedlings begin to bloom in the 5th-7th year. Babies formed at the base of the mother bulb should be separated during transplantation.

Despite the fact that plants are light-loving and bloom best in good light, they develop well in partial shade and even withstand shading.

In summer, plants normally tolerate fluctuations in room temperature, in winter they need a temperature of at least 12 °C.

Bulbs are affected by onion fly larvae, and slugs often parasitize the leaves.

Other plants from the Amaryllidaceae family